Throughout the off road world Yamaha’s rugged TT models are regarded by dirt riders with affection and respect, and over the years the TT has established a reputation as being one of the most pure off road bikes available today. In the early 1990’s Yamaha Motor Co., Ltd chose Italian Yamaha distributor Belgarda to develop and produce the legendary TT600, and this model has proved to be one of the most popular large capacity bikes in the category. Now, for the 1998 season, Belgarda announce the arrival of the new generation TT600R, a machine which has been manufactured to a higher ‘pure dirt’ specification, while still retaining the rugged simplicity that has made the model such a success.

The TT Story:
The original TT500 was created by Yamaha Motor Co. Ltd., in Japan in 1981, and was specifically designed for the Desert Race market in the USA. Essentially a heavily modified and stripped down XT500, the TT500 became a firm favourite with American riders who appreciated its gutsy performance, superb reliability and rugged character. Across the Atlantic in Europe the popularity of on/off road machines was growing and there was a booming market for big single dual purpose motorcycles. High profile desert race events greatly enhanced the image of the large capacity 4-stroke dirt bike in the off road world, while urban riders found the upright seating position and high-torque engine of the TT600 ideal for use in busy city streets — and the ultimate play bike for weekends. Between 1983 and 1992 the popular TT600 was updated with a number of important features such as the addition of a front disc brake in ’85 and many other detail changes that enhanced the bike’s overall performance. More than any other machine the TT600 captured the spirit of adventure that prevailed in the 1980’s. At this time the Paris-Dakar rally had grown from a relatively small event into one of the most important occasions in the off road calendar, and every January millions of people all over Europe followed the progress of competitors like Franco Picco, Serge Bacou, Jean Claude Olivier, Andrea Marinoni and Giampiero Findanno. Riding their single cylinder TT600-based desert race bikes, these riders conquered the most hostile terrain and climate known to man, and proved beyond doubt that the Yamaha TT could handle anything. Against this background the TT600 became the favourite choice with riders planning the trip of a lifetime to distant lands. Tough, simple and reliable, the TT600 allowed thousands of people to live their dreams and see the world from a new perspective. Launched in the early 1990’s, the TT600S was designed to satisfy the growing demand for a new breed of more versatile bikes designed for on and off road use. This was followed by the TT600E in 1994 which differed only in its electric starter and lowered suspension — features which were to increase the bike’s popularity with riders looking for an even simpler machine for on-road riding. Now, for 1998, Yamaha revert to the original, pure and undiluted off-road spirit with the new TT600R.

Model Concept:
Market research carried out among typical TT customer profile groups highlighted a demand for a simple, functional and reliable off-road machine offering good value for money. Such a machine would need to be both specialised and versatile at the same time, and would have to be able to cope with a wide range of conditions from off-road riding through to Sunday outings as well as extreme adventure touring and even full-on desert rallies. So in order to satisfy this demand Belgarda’s engineering staff set out to develop a hardcore off-road version of the TT600 which would be aimed at pure dirt use.

Development Goals:
In technical terms the TT600R is a completely redesigned machine which has very little in common with previous models. Engine sees major changes and improvements aimed at boosting overall torque and enhancing peak power in the high rpm range. Chassis is virtually all-new, and features revised frame geometry for superior off-road handling, as well as adjustable racing-specification front and rear suspension systems that allow riders to tune the bike to suit their own requirements.

Heart of the TT600R:
Is a proven 600cc 4-stroke air-cooled 4-valve engine with bore & stroke dimensions of 95mm x 84mm. Although externally similar to previous TT’s, the new R model engine features totally redesigned internal components aimed at achieving higher levels of torque together with uprated horsepower at higher rpm. Magneto flywheel diameter is reduced from 146mm to 130mm to give a significant weight saving of 600g — a move which greatly enhances throttle response at all speeds. In addition, this smaller flywheel has enabled our engineers to reduce engine width by a full 30mm, a feature which is sure to be appreciated by any rider who has ever been stuck in a deep rut before! For improved power output the YDIS carburettor and manifold bore is increased from 26mm to 30mm, and air cleaner capacity is increased by over 100% from 3.5 litres to a massive 8 litres. Complementing the new intake design is an all-new oval shaped Termignoni aluminium silencer, as well as a new digital ignition system for excellent throttle response and even crisper acceleration. Finally, first gear ratio is raised from 31/12 (2.583) to 30/13 (2.308) to make it closer to second gear for improved off road performance, and the gearchange head is manufactured from aluminium. The result of these major improvements is an additional 5 horsepower as well as a boost in torque from 4.8kgm@5,000rpm to 5.1kgm@5,000rpm, a truly dramatic transformation. To match this significant increase in power output the new TT600R is equipped with a large capacity 2.6 litre oil tank which ensures consistent engine temperatures for efficient performance. Manufactured from aluminium, this new tank is located at the machine’s centre of gravity to help enhance handling characteristics. Manufactured by Yamaha Motor Co. Ltd. in Japan, this new TT600R engine offers even higher-performance while retaining the superb reliability and simple design that has made the TT name a legend in the off-road world.

Chassis:
Chassis has been completely uprated and features a new layout frame and competition-quality front and rear suspension systems. Much lighter than any previous TT model, this sophisticated new chassis delivers superb off road handling performance and improved comfort which are sure to make the new TT600R one of the leading large capacity pure-dirt bikes available. Frame Manufactured from high tensile steel tubing, the TT600R’s redesigned frame follows the proven semi-double cradle design used on all of our off road machinery. Most significant change to the latest frame is the use of a 20mm shorter top tube as well as a much steeper caster angle, down from 28 degrees to 26.30 degrees. Another extremely important modification is that the engine is now tilted back by 4 degrees in order to achieve the optimal front/rear weight distribution. The result is a much more agile handling chassis which turns quicker — and with its lighter front end and increased power output the TT600R can handle off road obstacles much more efficiently.

Suspension Systems:
The quality of any off road machine’s suspension is an accurate guide to the bike’s potential in the dirt, and one look at the TT600R’s racing quality systems underline this new machine’s impressive overall specification. Running with massive flex-resistant 46mm tubes, the conventional Paioli forks offer both rebound and compression damping adjustment for accurate chassis set up. Giving 280mm travel, this competition-standard front end delivers precision steering together with excellent stability on the roughest terrain — and for easier steering the TT600R is equipped with a new style upper triple clamp fitted with new light alloy alumite handlebars. The completely redesigned Monocross rear end runs with a new shorter stroke ?hlins shock absorber which is operated by an aluminium Deltabox swinging arm. 20mm longer than last year’s structure, this high rigidity design works a YZ motocrosser-based linkage and offers an impressive 280mm rear wheel travel, a full 40mm more than before. Built to high quality motocross specifications, these new front and rear suspension systems transform the latest TT600R into a sharp handling pure-dirt machine that can handle the most challenging off road terrain.

Bodywork/Maintenance:
To underline the new TT600R’s totally uprated engine and chassis specification Belgarda have created all-new lightweight bodywork that combines rugged good looks with many easy-maintenance features. YZ-style front fender underlines the bike’s competition heritage, while the revolutionary new one piece rear fender/sidepanel assembly makes for much easier routine inspection and maintenance — and to match this novel bodywork the TT is fitted with a special two-tone seat. Slimline 10 litre fuel tank gives a useful range and allows easy body weight shifting, while the tough fork tube guards and compact headlamp assembly keep overall weight to a minimum. Special low maintenance features include a quickly detachable side opening air cleaner for easy filter changes, and a new inspection window on the oil tank for at-a-glance checking. Standard features include grease nipples on the swinging arm pivot for prolonged bearing life, and a tough new YZ-type chain guide built to withstand harsh off road use. Larger YZ-style footrests are fitted with easy-to-remove rubber grips, while aluminium passenger footrest keep weight low. Other well designed components include lightweight instrumentation featuring a speedometer, tachometer and indicator lights, 12V55W headlamp, tough aluminium sumpguard, adjustable front brake lever and frame-mounted ignition switch. From the specially designed one piece rear fender/sidepanel assembly through to the quickly detachable air filter, every feature on the latest TT600R is designed to enhance this bike’s off road performance and ease of maintenance — while still retaining the essential simplicity and reliability that TT riders value so much.

Wheels/Brakes:
Important change for the new TT600R is the use of durable Tagasako rims which are built to withstand the most severe off road terrain, and for enhanced handling the rear tyre size is now 130/80-18 compared to the 140/80-18 used on previous models. Front tyre remains 90/90-21. Front 267mm diameter disc is slowed by a high efficiency Brembo 2 piston caliper, while the rear end features a progressive 220mm disc and opposed piston Brembo caliper. Dimensions Featuring many changes to its frame and suspension systems, the new bike runs a 10mm shorter wheelbase (1480mm) and 10mm increased ground clearance while its 845mm width and 1230mm height remain the same. Considerable effort has been made in keeping the machine’s weight as low as possible, and the new TT600R is a full 4kg lighter than its predecessor at only 131kg. This in itself is an impressive weight saving, but in addition to the overall weight reduction our engineers have also been successful in concentrating as much mass as possible around the centre of gravity. The result is a machine which is both lighter and much more agile, allowing the TT600R rider to enjoy the uprated engine and suspension to its full potential.

Summary:
Few other motorcycles attract the same level of rider loyalty as Yamaha’s TT models. Over two decades the TT has made its name firstly as a winning desert racer and more recently as a versatile all-rounder. Completely redesigned for 1998, the all-new TT600R is lighter, more powerful and built to a higher pure-dirt specification than ever before. Yet at the same time as being one of today’s most desirable and sophisticated off-road big singles, the new generation TT600R retains the rugged, reliable and simple character that has made the legendary TT name so successful. Blending Yamaha reliability with Italian brand flair, the new TT600R is sure to appeal to the many riders who are looking for a machine that can handle just about any kind of off-road situation, from a Sunday morning trail ride through to competing in an African Rally. 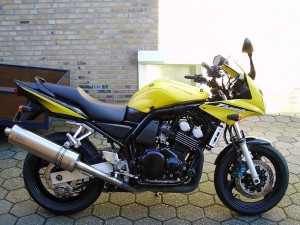 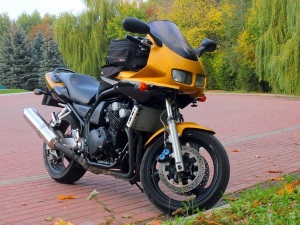 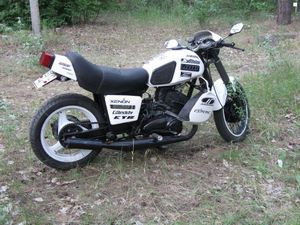 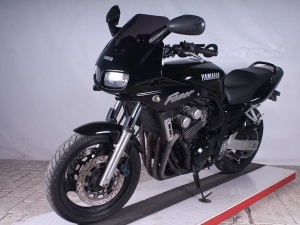 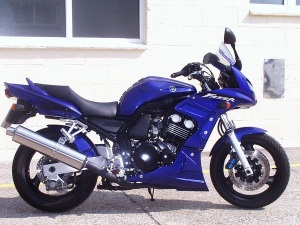