On board Andrea Bocelli’s yacht Libertas

Andrea Bocelli grew up on a farm in Tuscany and prefers pasta to fish. So how did the tenor, who lost his sight aged 12, end up owning seven boats — and counting? He tells Marilyn Mower about his latest passion: a 22m Gamma named Libertas.

Andrea Bocelli is late. The legendary tenor was due to meet me at his waterfront home in Miami to talk about his latest purchase: Libertas, a 22 metre steel motor yacht designed by Vripack and built by Gamma Yachts. But where is he? In a much smaller boat being driven by his teenage son, it turns out, on his way back from a meeting on Miami Beach. With teens and schedules being things of only occasional intersection, I’m forced to wait.

Not that I mind. The setting by the pool looking east across Biscayne Bay to Bal Harbour is lovely and serene – exactly the sort of environment one comes to Florida to enjoy. It is a characteristically Bocelli address, too, chosen not to impress but to give the impresario what he needs: a warm place to relax and take in the sunshine and breeze between concert dates on his winter tour schedule. It’s a hidden gem, where a modest neighbourhood evolves into large waterfront homes, rather than a dredge-and-fill zone of instant dressed-to-impress McMansions.

It was 2013 when Bocelli landed in Miami for a break from concert dates in frigid New York. He is not a man who enjoys cold weather. He told his then girlfriend Veronica Berti (they married last year) that he would buy a house in Miami tomorrow. “And he did the next day,” she recalls with some surprise.

Now Berti is getting worried. Her son, Amos, is not answering his phone. Tour support manager Pete Kepes is scanning the waterfront and watching the day’s schedule implode. Anxious moments pass before the boat arrives and Bocelli springs up on the dock. He looks so relaxed in white shorts and a red foul-weather jacket that I try to interview him on the spot, but Berti intervenes, ushering him upstairs and into what she calls proper yacht club attire.

Bocelli on board Libertas

Once photos are done, Bocelli comes to sit with me and the translator. He apologises for requesting the translator but says he’s on holiday and doesn’t want to work his brain too hard. He’s humble to a fault; his English is smooth and charming. Bocelli, it turns out, is a serial yacht owner, admitting to seven different boats in the last 15 years. So how does a boy from a farm in Tuscany come to love yachts?

“Every summer, all the family went to the sea. When I was 10, my parents bought a house close to the beach, near Viareggio. My brother and I were always in the water. My father liked the sea also and bought a rubber dinghy,” he says, smiling at the memory. He would have two summers bouncing around in the dinghy with his brother Alberto, before a football accident took Andrea’s sight. Yet children are resilient and he learnt to make his way.

“I like to do many things on the ocean. I waterski, also swim, and I learnt a little windsurfing. I don’t like fishing. I suffer when I see the fish suffer. And I don’t so much like eating fish. I prefer pasta… I’m Italian.”

Bocelli uses the words “see” interchangeably for “experience” and his blindness is almost never acknowledged. He is said to touch new materials a lot, choosing leathers, fabrics and surfaces based on how they feel to him. He likes quality materials – as long as they’re practical. Bocelli remembers colours too: he likes blue and apparently Berti does too.

The saloon on Libertas

Our conversation turns to the family farm in Tuscany. “I love the animals,” he says. “I have three beautiful stallions, but I can only ride two or three times a month.” He and Alberto, with Alberto’s wife Cinzia, have developed the family farm, now encompassing 120 hectares, to include a vineyard, tasting rooms for the Bocelli wines and two rental apartments.

When Bocelli began customising the details of his new yacht Libertas with Gamma owner Guido Bonandrini, it started in a rather odd place – the bow – and a request for forward seating for the maestro. Bonandrini is a former world-class powerboat racer turned boatbuilder, who sought out a small production niche in custom boats with flexible design, and delights in customising them with the client’s family. “We are a small company and I didn’t want to compete with the fibreglass boatbuilders,” Bonandrini says. “Steel is forever. Steel is safe, the boats are trialled in the North Sea. Sound and insulation is different in a steel boat.”

Gamma boats are designed by Vripak, well-known for the less-is-more philosophy of its owners, Marnix Hoekstra and Bart Bouwhuis. Not only did Bonandrini support 3D analysis and full tank testing for the most efficient semi-displacement hull shape and maximum use of space, he also adopted a construction method devised by Vripak called “Smart Kit” to shorten the construction time by pre-cutting the majority of the yacht’s parts. The Gamma 20 can be built in 10 months.

“You would be amazed how knowledgeable [Bocelli] is about hull speed and the performance of different boats,” Bouwhuis says. “He told us Libertas would mostly be used for two- to three-day voyages in the Med.”

Bocelli with his wife and business partner Veronica Berti

Although Gammas are designed for owner/operators, Libertas needed to accommodate crew, and offers 170 square metres of living space. The addition of a fourth cabin increases accommodation to nine guests, and the master cabin windows have been enlarged to let in more light and views. For the interior, he chose matt oak panelling with natural oak floors.

About the bow’s forward seating, Bocelli says, “I like to stay in front of the boat. It has more silence, more air; it is more possible to smell the ocean. For this reason I decided to have a small table (at the bow) with a chair to have a coffee. It would be a great place to have a cigar… But I don’t smoke.”

Each deck is a single level and the main deck has walkaround side decks and a 360-degree view so Berti can keep an eye on things and on little daughter Virginia, who is only two. The flybridge rails were modified for better safety and it also has a diving board.

Amos, who recently obtained his captain’s licence, is looking forward to spending time running Libertas himself next summer. “It will be quite the party boat,” he confides. “I love the way that the space has been arranged so that our family can be together, while respecting everybody’s privacy,” Bocelli notes.

The open-plan saloon has double-glazed windows befitting its Yamaha electric piano and plentiful speakers. Bocelli’s time aboard is spent mostly relaxing or practising new material. “When I have to study a new opera, I bring a pianist and I study on the boat,” he says.

His concert schedule isn’t the only thing that keeps him busy; Bocelli started the Andrea Bocelli Foundation (ABF) in 2011. As someone who knows what it’s like to need from others, he decided that success gave him the chance – he calls it “the joy” – to give back. It’s become a binding priority in his life.

Another effort is supporting programmes that break down cultural or economic barriers for the poorest of the poor, such as in Haiti. One of the current projects is called WHEAT, standing for Water, Health, Education, Action and Time. It supports the running costs of three schools serving 243 Haitian children, giving them food and delivering clean water to three areas without potable water.

Why Haiti? “We met a priest, Father Rick Frechette, by chance several years ago and were impressed with his St Luke Foundation. Now ABF helps St Luke provide education, medical care and farming instruction to more than 800 families. You don’t choose such a programme – it chooses you,” says Berti.

In December, the United Nations Correspondents Association awarded Bocelli and Berti its UNCA Global Citizens of the Year title for the Foundation’s devotion to helping those in need. ABF recently brought clean water and blankets to 1,500 refugee families in Iraqi Kurdistan in conjunction with the UN’s High Commission for Refugees. “The lives we have been gifted offer us the privilege and responsibility to give the less fortunate a better future and opportunities,” Bocelli says.

Speaking of opportunities, the day after Bocelli took possession of Libertas the couple set off for Valencia, where he was to record Turandot with conductor Zubin Mehta. They spent 15 days on the boat. It was a rough trip but Bocelli had a great time being at sea. The yacht had just tied up in Valencia when Bocelli threw open the doors and began to rehearse. On the dock, a man asked a crewmember if he’d come off the blue Gamma that had just arrived. When he nodded affirmative, the stranger said, “That’s some sound system you have.”

We should all be so lucky to be in port when Libertas arrives. 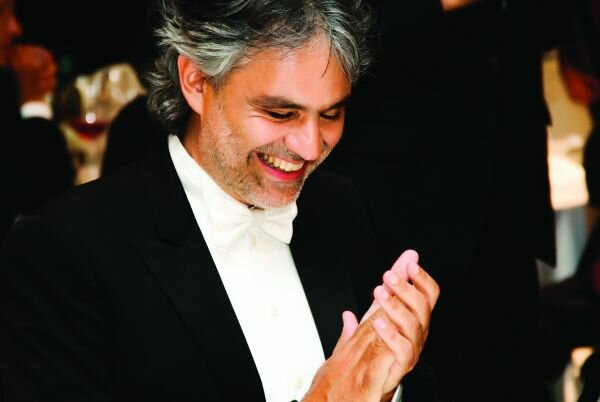 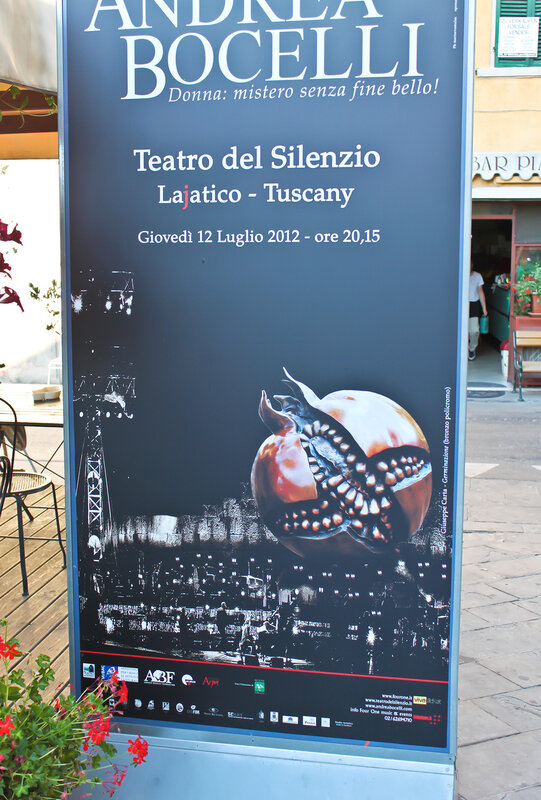