1974 TX650-A Cinnamon Brown (looks really maroon) non-us had a Vegas Green. Earlier models of the 650 had a compression release to aid starting, 1974 got a new stronger starter so the comp-release was eliminated.

1982 XS650-SJ
1983 XS650-SK HERITAGE SPECIAL New Yamaha Black or New Ruby Red ( these bikes are rare, all the pics I have show wire wheels so I don’t know if there was a cast wheel version. And I can’t even find a pic of a red one so they must be rare also)

For such a large capacity machine, the XS is physically small. The lithe and compact bike feels, and indeed looks, as if it was created out of left over RD chassis and cycle parts with a big lump of a twin-cylinder four-stroke unit dropped in as an after thought. In reality this first impression isn’t so far away from the truth and the very early, pre 1975, versions of the XS were exactly that, with a chassis and fork set up too thin and weedy to ever keep the plot running straight and true. With the B model things improved immensely enabling a fair impression of good handling to be carried off. With a mere 50 horses on tap, and weighing more than a modern day sports bike, the ride is never going to be high spirited but it is fun. The torquey, 360-degree engine, pulls from as low down as 1800rpm, all the way through to the 7500rpm redline. With a shade under 40 ft-lbs on tap across a wide portion of the rev range the acceleration and pulling power is brisk no matter where you decide to unleash it. There is some vibration around the 4000rpm mark and then again up near the 6000rpm position, this is simply the trade mark of an inline twin that has the pistons travelling up and down in unison, and difficult to eradicate without complex, and power sapping, balance shafts and counter weights. Yamaha chose not to go down that route with their first four-stroke design and let us have it just as nature had intended, warts and all.

Immediately the willingness of the engine makes itself apparent. A pair of constant vacuum Mikuni carburettors feed the fuel in with stunning precision, no matter when you open the taps, while a mechanical, advance and retard, unit keeps the sparks firing exactly where you want them to for the best performance throughout the rev range. All round the XS is a delightful machine to be on. it is no more powerful than most 400cc machines of the day but it has its own way of doing things. Horsepower isn’t everything and torque plays an important part in the bikes make up, that constant thump propelling the bike along at all speed rather nicely.

The small chassis is easy to move around and, allied to the strong and dependable engine creates a superb ride. You can either dive up and down the gearbox in a mad rush to enjoy the higher end of its speed range or just leave it to plod along at a more sedate and relaxed pace, either way the ride is always fun. Even two up the engine doesn’t appear to take too much notice of the extra weight and just keeps on pulling as before.

The seat is a shade on the thin side and is most probably the limiting factor in exactly how long you could spend in the saddle. The positioning of the footrests doesn’t help either, leading to an uncomfortable riding style with the rider sat almost upright. There simply isn’t enough foam between you and the bike to make the ride more comfortable. The lack of seat padding does give a better feel of what the bike is doing on the road however and may have been another area that was altered to improve the original machines road holding. What doesn’t help the rider control the bike is the excessively rubber mounted handlebars, these add a millimetre or two of slack into any input and does take a little getting used to at first. Of course without the flexible bars the engine vibrations may well cause severe numbing of the hands with prolonged use.

As bikes go, the XS650 is a pretty basic design. It doesn’t challenge any of the Japanese multi cylinders motorcycles from the same period but it did carve a niche for itself none the less.

1969 saw the day the old school of UK bike manufacturers had to sit up and take notice. Yamaha not only had the audacity to make a four-stroke twin, they did it considerably better. While the other Japanese makers were trying to second-guess the next stage of development following by the launch of the pivotal Honda CB750, Yamaha had entered into an engineering exercise second to none for completely different reasons. They faithfully recreated the style and performance of the British twin but used the very latest of technology available at the time to execute the mission. With every reciprocating part running in roller or needle bearings the internals of the XS engine resemble more a two-stroke power plant than a four-stroke one.

The earlier versions even ran needle roller small end bearings instead of the usual plain bush type common in every other type of four-stroke. The project began back in 1967 following the successful use of a Yamaha four-cylinder, four-stroke engine in a Toyota car. Effectively two of the four cylinders were mated together on a horizontally split crank casing to form the basis of the 650 twin. The design team then employed the huge computer within the company’s music division to create a completely new crank and camshaft layout for the big twin. The result was then grafted into a 350cc YR1 frame, a decision that would be a weak link when the bike was finally produced.

The result of these construction techniques is, perhaps, the toughest inline twin motor created from the period, and for some time after it. At the time, and until the mid seventies, the XS was a very important machine within the Yamaha range as it was among the most complex, and also the largest capacity machine, they had ever produced. The XS has, over the years seen action in ever type of racing machine from side care outfits to American flat trackers and road race machines. It has been big bored and tuned way beyond its original design mandate with little effect upon its reliability. While the engine was just about right from the outset, the chassis left considerable room for improvement. The original XS1 was heavily updated with the introduction of the XS2 in 1972, including new crankcases that enabled the fitting of an electric start. The electric start used a combined decompression lever and starter mechanism, to relieve strain on the battery and motor. The brakes were updated too with the fitting of a single disc brake to the front. Still the chassis remained the weak point and it would appear as if Yamaha themselves knew nothing of, or didn’t have an answer for, its shortcomings.

In 1972 the type was introduced into the UK and European markets. The XS didn’t win many sales in the UK, mainly because of the poor handling, and the type’s popularity was centred on the US marketplace. Eventually, around 1974, the newly formed Yamaha Amsterdam NV, looked into the types poor sales and considered a major redesign to rectify several identifiable problems contained within the original machine. The trust that Yamaha Japan had placed in the new importers was unprecedented but became the first of many such successful collaborations which later resulted in the dominance of Japanese machinery in the UK and Europe in general. Before this point machines were designed for, and developed in, the US, to cater for their tastes explicitly.

Yamaha Amsterdam enlisted the help of several top racers to give their opinion on the type; the most vociferous of these was ex Triumph test rider and factory rider, Percy Tait. Tait, once he had tested the machine at length, gave Yamaha all they needed to identify the poor handling and he was quickly whisked off to Japan to begin further development work. As soon as he saw the Yamaha test facility he knew exactly the cause of the initial problems. The superb factory test track was as smooth as a billiard table and not at all representative of the sort of roads the bike was being used on in real life, basically any machine ridden smoothly around the circuit would handle adequately. At Tait’s request, steel plates with raised tarmac applied to the upper surfaces, were positioned mid corner to upset the bikes handling and pretty soon further deficiencies in the design made themselves all to clear. The frame was beefed up and a hefty fork brace was grafted under the front mudguard to prevent flex. The head angle was steepened slightly to sharpen the steering, while a narrower front tyre and alloy wheel rims were also fitted to lighten the load through the handlebars. To also alter the heavy feel of the front end, the brake calipers were replaced on the rear of the fork legs. The result was the XS650B, a heavier, by around 30 kgs, and stiffer framed machine, that was far more agile and at last could hold its own in the handling stakes against much of the current opposition. In the UK the new XS650 gained favourable reviews within the press and sales steadily grew.

In 1978 the E model was introduced featuring thicker, 35mm fork stanchions and single piston floating callipers. Some consider this latter move to have been a backward step as the original twin opposed piston calipers were among the very best in the business being identical to the items used on the successful Yamaha road race machines. In reality the new brakes although lacking the initial bite of the originals items were just as powerful. The XS also grew into a custom styled special which was an even bigger success than any of the previous models, instantly appealing to a market place previously the preserve of Harley owners or specialist builders.

By the end of the production run in 1985, over 500,000 XS650 variants had been produced, making it one of the all time greats albeit without the usual fuss and commotion associated with such commercial success. The Yamaha had simply got on with the job in hand, outliving by a good margin, the machines it was designed to tackle like the Harley sportster and Triumph Bonneville. To achieve this, the XS had to adopt many guises from street racer to custom special. Arguably, it was the latter that reinforced its position in the world of motorcycling.

1972 XS2
Electric start, disc brake and the types introduction to the UK market 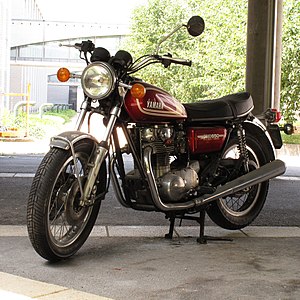